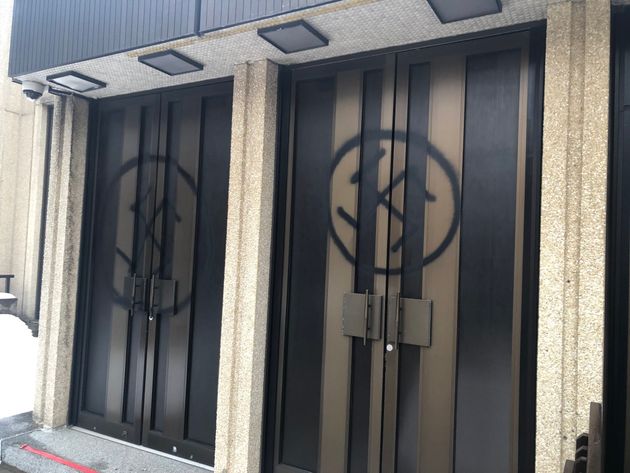 Rabbi Adam Scheier of Shaar Hashomayim, one of the largest synagogues in Montreal, said in a letter to members of the congregation that a man had spray-painted swastikas on the doors of the temple around 2 p.m.

Scheier said the man was quickly detained by a security guard, adding that police arrived soon afterwards and arrested him. The synagogue said the man was carrying a canister of gasoline when he was arrested.

Montreal police did not immediately respond to a request for comment on Wednesday.

Rabbi Reuben Poupko, co-chair of the Quebec branch of advocacy group Centre for Israel and Jewish Affairs, said the community is outraged by Wednesday’s “vile assault.”

“This attack targets the entire community and all those who embrace civility and tolerance,” he said in a statement. “Coming in the wake of other violent anti-Semitic attacks, it is yet another reminder of the dangerous role social media continues to play in the spreading of hate and the provocation of violence.”

The desecration of Montreal’s Shaar Hashomayim with the most vile and abhorrent symbol of evil and hate is an utter disgrace. I ask all Canadians to stand with Shaar Hashomayin and members of the Jewish faith as we condemn this act that has no place in this country! #cdnpolipic.twitter.com/qReCK4KSph

This is despicable. I condemn this vile act in the strongest terms possible and stand united with Congregation @ShaarHashomayim, Rabbi @AdamScheier, and Jewish Canadians across the country. We must always denounce antisemitic hate, no matter when or where it arises. https://t.co/lD8LaPNaz9

Federal Indigenous Services Minister Marc Miller, who represents a riding close to the synagogue, condemned the vandalism in a post on Twitter, calling it an “utter disgrace.”

This report by The Canadian Press was first published Jan. 13, 2021.

This story was produced with the financial assistance of the Facebook and Canadian Press News Fellowship.